A brief history of Blain Hydraulics 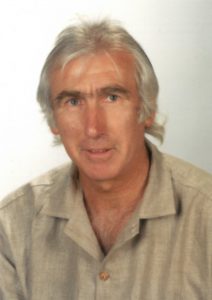 Born in May 1932 in Salford, Manchester and lived in Ilford, Essex, until he was 6, before moving back to the North where he later studied engineering at Salford Royal Technical College.

After serving 2 years in the Merchant Navy followed by 2 years in the army, he pursued a career in industrial hydraulics in England, Switzerland, Spain, USA and finally Germany, where he founded Blain Hydraulics which is known worldwide as the finest elevator control valve manufacturer.

A brief history of Blain Hydraulics

1971-1980
Blain Hydraulics GmbH was incorporated in Heilbronn. With a modest infrastructure and man power, elevator control valves like EV & KV started rolling out initially with 1 person and eventually with 5 people on the outskirts of Heilbronn. For catering to growing demand, the factory was moved within Heilbronn and steadily expanded.

2011-today
Blain launches the EV4 (vvvf driven valve) together with YASKAWA as a joint product.
Export of Blain products achieves new record with a footprint in more than 75 countries. Blain employs around 80 people from more than 14 nationalities to support customers worldwide.
Year 2015 saw Blain enlarging its presence in India by incorporating Blain India.
Blain has partnered with DAIKEN ELEVADORES (Brazil) to expand its presence and increase the penetration of hydraulic elevators in the Brazilian and South American market.
Summer 2017 Blain introduced the integrated iL10 and L20 as new UCM-A3 valves allowing to modernize existing installations with less cost and efforts.
Blain Turkey was incorporated in 2018 to widen our footprint to the Middle East and Africa.
Blain Hydraulics Inc. was incorporated in 2018 to support Blain’s growing customer base in North America. Blain Inc. would enable Blain to reach out to the North American elevator market more effectively through close engagement in pre and after sales support.
2019: Blain launches the next generation smart valves which offers technicians a very easy and comfortable way of adjusting and monitoring the valve performance using their smart phone / Tablet with valves having on board Wi-Fi. The smart valves series consist of next generation Servo Electronic Valve and the EV40-VVVF valves. With these products Blain becomes the first company to introduce the smart technology in the hydraulic lift industry keeping in line with its tradition of always being innovative and staying a step ahead in offering world class tech savvy products.